It is a tree growing commonly mainly on the Pacific Northwest Coast and in rainforests of the central part of British Columbia, Canada. 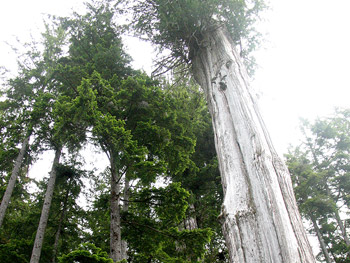 It is one of the longest-living trees and of the most resistant to fungi and insect pests of all conifers in North America.

Thanks to its high natural immunity, the tree can reach a really large size and on average it measures 45 to 60 m in height and 2.4 m in diameter. The biggest existing tree of this kind is currently the cedar growing in Quinault Lake Olympic National Park in Washington state, USA, which measures 55 m in height and 22 m in circumference of the trunk. Its age is estimated at 2000 years, and the wood thickness at around 500m3.

The history of using the western red cedar is long and dates back to the first nations living on the Pacific Northwest Coast who used wood, bark, branches and roots to build houses, means of transport and household, fishing, hunting and religious rituals tools.

It is estimated that British Columbia forest resources amount to around 750 million m3 of standing western red cedars, of which around80% are located on the coast;  it is the second species of conifer in terms of occurrence. The majority is the so called old-growth forest in which the age of the trees is estimated at 250 years. Nearly 50 million m3 of cedar growing in the coastal area is located in parks and other protected areas. A considerable part of the forest area is included in the "working forests" (for industrial use) most of which have received or are in the process of receiving certification.

Red cedar of the so calledsecondary forest is gradually included into use together with the old-growth forest trees in order to obtain high quality wood.

Red cedar harvest fluctuates around 6 million m3 annually which is an amount acceptable for maintaining balanced forestry which is defined in the state annual harvest plan.

Western red cedar wood is light, with a homogeneous structure and is straight-grained. It does not contain any resins or oils. These features make it exceptionally easy to work. This wood can be widely used everywhere where resistance to fungi and molds, stability and insulation play an important role. Red cedar wood is used to make: facade and terrace boards, glued or solid logs used as wall elements, posts, paneling, plate and profile elements, musical instruments, shingles and many other. And the sawmill waste is a sought-after material by the pulp and paper industry where, due to the perfect morphological structure of the cedar fiber, it is used to manufacture special stationery. 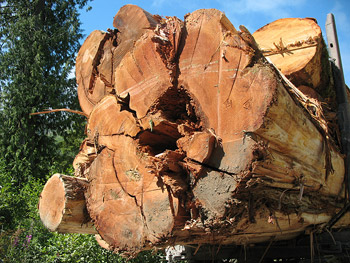 Physical properties of the wood of the western red cedar

Heartwood - straw-colored to various shades of pink or reddish-brown. Used in weather conditions without any protection changes color to gray or grayish-brown. Heartwood wood is straight-grained with a homogeneously rough texture, it does not contain any resins or oily substances and it has a characteristic sweet aroma. It is very poorly permeable to water and water-soluble chemicals. Thujuplicins, thuja acid and polyphenols give it a high natural immunity to fungi and insects.

As a result of low density and low shrinkage factor, red cedar wood has a perfect dimensional stability. The main reason for thus big stability is the fact that the saturation point for the cedar wood fibers is reached at the humidity level of 18 - 23% which is a low value compared to the majority of conifers for which  the saturation point is reached at 25-30%. Low water absorption is a result of high content of solvent substances which block absorptivity. Red cedar wood shrinkage from the level of fiber saturation to complete dryness in the radial direction amounts 2%, and in the static direction 4.5%.  Thanks to this property cedar wood is a perfect material for use in places with changing humidity conditions, such as: roofs, elevations, gardens and everywhere else where dimensional stability, low susceptibility to warping and deformation, and water resistance are of importance.

Flame expansion speed and classification of smoke generation for the western red cedar is much below the maximum limits set by the construction law for the U.S. and Canada.

Due to low density and loose fiber structure, western red cedar has very good insulation parameters. It is the best insulator of all commonly accessible conifers, not to mention materials such as brick, concrete or steel. Its thermal conductivity (k) amounts 0.11 W/m'C (or 0.74 BTU in/ft2h'F) with humidity at 12% (USDA 1952). And due to low density, western  red cedar has a faster charring rate (around 0.8 mm/min) as compared to denser tree kinds, e.g. Douglas-fir which has a charring rate of 0.6 mm/min. Charring rate is the depth of the change of wood fiber into charcoal. Higher charring rate of the western red cedar is commonly perceived as insignificant.

Classification of smoke generation determines the amount of smoke created by burning material. Maximum values set in building codes of Canada and the U.S. for finishing of inner walls and ceilings in high-rise buildings amount respectively 300 and 450. As shown below, western red cedar has much lower levels of flame expansion degree and of classification of smoke generation than the limits set in the building codes for the U.S. and Canada.

Red cedar wood, after drying and grounding, reacts exceptionally well to all kinds of lacquering surfaces, paints and stains.  It glues well in various conditions and with use of various glues. Cedar wood is one of the easiest to work due to its straight grain and homogeneous texture. The processes of cutting and polishing are very easy thanks to the low wood density - energy-saving.

However, it is important to remember that unseasoned, wet red cedar wood can cause corrosion and faster wear of saws due to high content of thujuplicins and polyphenols. It is therefore recommended to use stellited saws. It is advisable to fasten red cedar wood elements with nails, screws and other fasteners made from stainless steel or highly resistant to stretching or deeply galvanized aluminum. Using nails or other fasteners made from casual steel or copper will cause their accelerated corrosion and fast decay of the wood surrounding the fastening.

Due to the low ability of the cedar wood to hold screws and nails, it is advisable to use 30% longer fasteners as compared with ones used for wood from deciduous trees.

The ability to suppress vibrations is an important quality of the cedar wood which  used for covering walls or floors enables a successful reduction of the noise level. And the outstanding resonant properties of thin, straight-grained cedar elements are used for musical instrument production. 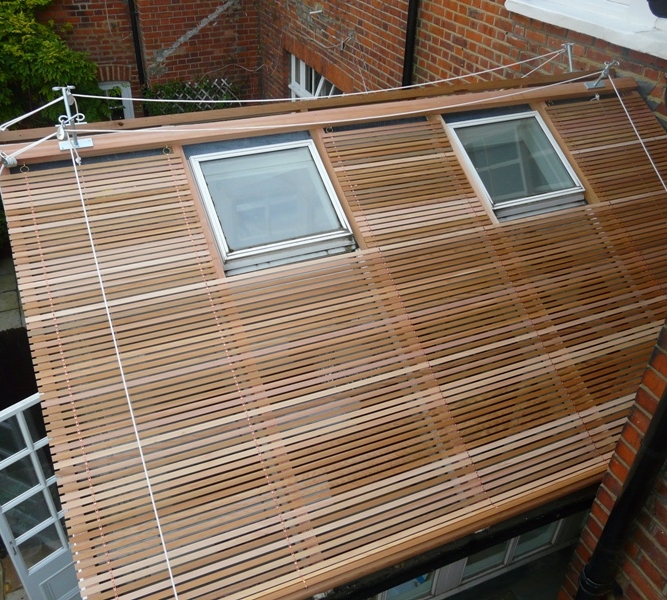 As far as main ingredients are concerned (cellulose, hemicellulose, lignin), the chemical composition of red cedar wood does not differ substantially from other conifers, while the content of solvent substances is twice higher, as a result of which cedar wood differs considerably on color and smell. Thanks to compounds such as thujaplicin, thuja acid and polyphenols, wood has considerable fungicidal properties while methyl thujan gives the wood specific smell and insecticidal properties.

A confirmation of high natural resistance of the western red cedar is the European standard EN 350-2 from 1994, where the natural resistance of the wood of particular tree types has been presented in a division into 5 classes: from 1 - very resistant to 5 - not resistant. The classification refers to the heartwood. According to this norm, red cedar wood from North America has been assigned to class 2. To compare, the European most fungi-resistant wood of European Larch has been classified as 3-4.

Despite high content of fungicidal and insecticidal secondary components in the cedar wood, no negative influence on human health has been found. On the contrary, red cedar is used for manufacturing kitchen utensils, food containers, baking boards, etc., as well as, for building saunas.

As a result of low density of the cedar wood and mechanical properties resulting from it, the possibility of using this wood for construction elements is limited.

The unique properties of western red cedar wood, distinguish it in a particular way from other conifers. It is commonly known for its high immunity to fungi, molds and insects which makes it a perfect material for outside use for rooftops, elevations, soffits, finishing entry roofs, fences, sash windows, terraces, casings, noise barriers, arbors, garden furniture, etc. This wood is sought-after everywhere where the natural look together with stability and natural resistance are important. Its characteristic grain, texture and color will suit both traditional and modern design. Its dimensional stability and look make it a perfect material for indoor uses, such as window blinds, board elements for covering walls and ceilings, profile elements, paneling, saunas, etc. Its cellular structure contains inner air spaces which increase insulation properties in an unusual way as compared to other tree types, as well as, bricks or concrete. Therefore, buildings covered with cedar are cooler in heat and warmer in winter. Cedar has also perfect sound attenuation and absorption properties which allow it to be successfully used in concert halls in order to increase acoustic values. It is easy to work with both mechanical and hand tools. Due to its low specific gravity it is easy to manipulate and install in both industrial and household conditions. It does not require pilot drilling for fastening with nails or screws and it glues easily. It does not contain resins nor oily substances which allows for use of a wide range of finishing products. Western red cedar is renewable ecological material acquired from certified forests managed in a balanced way.

Translation based on the publication no. SP-37R published by: Forintek Canada Corporation Entitled: „Growth, properties and uses of Western Red Cedar” by Josefina S. Gonzales